In my mail last Saturday I received a notice from Gunner Patchins’ daughter that he passed away last month on February 5th. I managed to contact her via phone at her home in North Carolina on Sunday and she advised me that he had passed peacefully in his sleep with his children and grandchildren with him. He was diagnosed in early January with a fast acting cancer effecting his liver and bladder. He declined chemo therapy knowing he had no chance of beating the aggressive cancer in his body. He was buried in the National Cemetery in Beaufort, SC, along side his beloved wife Angie who passed a few years ago. 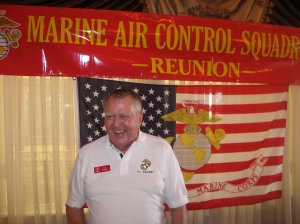 Knowing the love he had for the Marine Corps, his family placed a USMC challenge coin in his hand, the one thing he always carried in his pocket. I’ll never forget the junk-on-the-bunk inspection by him in Atsugi in 1964, and the great memories of him attending our MACS-8 reunions.

His daughter said he and Angie looked forward so much to attending the reunions. I will miss him, his laughter and his kidding, and I know he is having a great time with fellow Marines in heaven.

Len Patchin’s picture was taken at the MACS-8 reunion in St. Augustine, FL, 2011, which was the last reunion Gunner attended.

Below is Gunner’s obituary I found on-line:

Leonard Joseph Patchin: Marine CWO-4 Leonard J. Patchin passed away on 5, February 2013, at his residence in Port Royal, SC. He is survived by his brother, Charles Patchin and his children, Kathleen, Lynn and Timothy along with his grandchildren Kiana and Josh. He was born in Auburn, NY. and soon after graduating from high school, joined the military where he spent over 30 years serving his country. He married Angie Giannotta in 1956 which began their Marine Corps career and the trials and tribulations of military life. They were married for over 55 years and were able to travel the United States, transferring from duty station to duty station. His tours included Parris Island, SC, several times, Camp Lejuene, NC., Kaneohe, HI, Atusugi, Japan, Iwakuni, Japan, IWO Jima, and Vietnam from 1969 to 1970. Leonard was always a proud Marine and a honorable man. He enjoyed his family and the military life style which afforded him the opportunity to show his family the world and give them opportunities they may have never otherwise had. He always stated that the best duty stations he had, was the one he just left and the one he just arrived. He and Angie lived a full and good life together so in his death we celebrate his life. So we ask that you join the family in that celebration. The family will receive guests on Monday, February 11th from 6:00pm to 8:00 pm at Copeland Funeral Services. A private family ceremony will be held at the Beaufort National Cemetery. In lieu of flowers, we ask that donations be made in his name to the Wounded Warrior Project so that fellow service members and their families receive the help and support they so very well deserve. Please share your thoughts and stories about Leonard and his life by visiting www.copelandfuneralservice.com Copeland Funeral Service is assisting the family with arrangements.